Down the Rabbit Hole: Curious Adventures and Cautionary Tales of a Former Playboy Bunny by Holly Madison 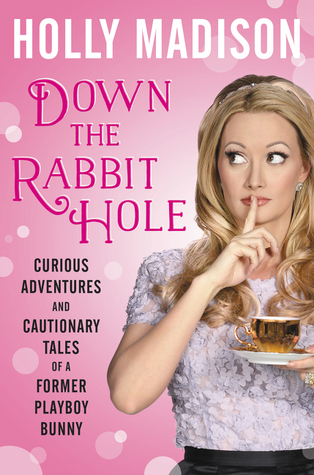 Or, as I called the book in my head, Everyone is a Whore Except Me and Here’s Why. Better yet: The Truth About Kettle: An Autobiography by Pot.

Look, I’m not going to pretend that I had any good reason to read this book. Underneath the surface, this is a scathing indictment of unfair beauty standards, the fear of female sexuality, and the entire goddamn patriarchy (and Madison, delightfully, seems blissfully unaware of the deeper implications of some of her observations about the unfairness of life at the Playboy Mansion – she’s just mad that all these girls were so mean to her). But that’s not why I read it. I read it because “behind-the-scenes look at trashy reality show” is one of my favorite memoir styles, and I’ve always been weirdly fascinated by mistresses, harems, harem culture, and the whole “what men think women do when they’re not around vs. what women actually do” issue. But mostly I just wanted dirt on Hugh Hefner, the weird atmosphere of the Playboy Mansion, and the women who were paid to have sex with Hefner under the guise of “girlfriends.”

I wanted dirt, and hoooooly shit, readers, does Holly Madison deliver the dirt. It’s hilarious that the cover photo shows Madison holding a finger to her lips, because she is holding nothing back here. A more honest picture would be Madison shouting at the reader. Reading this book is sort of like sitting down for coffee with a casual acquaintance right after she’s broken up with her boyfriend, and you have to sit there and listen politely while she unloads every complaint and annoyance she ever had while they were dating. In short, Holly Madison has some things to get off her chest, and god damn was I here for that. I read this book in two and a half days.

So, some background: Holly Madison spent seven years living in the Playboy Mansion as one of Hugh Hefner’s “girlfriends.” In the early years, she was one of a larger group of girls (who are always referred to by Holly’s hilariously oblivious narration as “the mean girls”), but later the girlfriends shrank to three members: Madison, Bridgette Marquette, and Kendra Wilkinson. The women gained fame when they starred in a reality show based around the Playboy Mansion, and then eventually moved on to get their own shows once they left the mansion. Sidebar: there are a ton of The Girls Next Door episodes on YouTube right now, and there are worse ways to waste an afternoon.

Madison’s memoir is an incredible portrait of a total lack of self-awareness. She spends most of this book desperately trying to convince the reader that she is somehow different than all the other women who “dated” Hugh Hefner and posed in his magazine. See, those other girls were dumb bimbos, but not Holly! She only pretended to be dumb! The other girls were cookie-cutter blondes who all looked like clones of each other, but not Holly! Sure, she bleached her hair and got plastic surgery, but only because she wanted to fit in! It’s totally different! And the other girls were opportunistic sluts who only used Hef to gain fame! Not Holly! Sure, she left the mansion and got her own reality show, and went on Dancing With the Stars, and starred in a Vegas show, but she accomplished all of that on her own! The fact that each of these projects made direct references to her history with Playboy is just a coincidence!

It is stunningly absurd that, for all the time Madison spends insisting that she’s built a career on her own and has completely escaped the shadow of Playboy, she can never convince the reader that she’s become famous in her own right. I mean, for God’s sake, the subtitle of this book makes sure to mention that Madison is “a former Playboy bunny” because like it or not, that is Madison’s sole claim to fame.

Of course, to hear Madison tell it, she was just playing the game, and was trying to get out all along. She never loved Hef, and had to pretend otherwise because it suited his cultivated image. She merely played along, Madison insists, until she was able to escape. The idea that other women may have had the exact same strategy has not occurred to Madsion, and she remains blissfully unaware of her own hypocrisy. One of the many, many bits of vengeful gossip Madison gives us is that Kendra’s signature loud laugh is completely faked, and that Kendra only started doing it to distinguish herself from the other women. This, readers, is the dictionary definition of “pretty fucking rich” because have you ever heard Holly Madison’s laugh? She just bleats “ha ha ha ha” in a monotone, like someone who mispronounces a word because they’ve only ever seen it written down.

And for all her railing against “the mean girls” of the mansion, Holly Madison is like the most petty and passive-agressive person I’ve ever read about. After detailing her breakup with Vegas magician Criss Angel (Vegas. Magician. Criss. Angel.) Madison gleefully quotes, at length, all of the negative reviews his show received. I’m pretty sure that Peep Show, Madison’s own Vegas show, wasn’t exactly showered in positive reviews, but as far as she’s concerned, it was a massive hit and everyone loved her and her lifelike, nuanced acting. And Madison makes sure we know that after she left The Girls Next Door, the show was a failure without her and was quickly canceled. When Madison’s own reality show is canceled after two seasons, she explains that this was right after a new president came on at E!, who wanted to move away from Playboy-related content. The implication is that, if it wasn’t for this change in management, Holly’s show would still be running today. When she is accused of starting a twitter fight with Hefner’s new girlfriend by claiming she stole her look (a look which, remember, Madison adopted in order to fit in with all the other bleached, surgically enhanced blondes at the Mansion), Madison is adamant that she did no such thing, and only posted a generic tweet about hating copycats. I see you, Madison. You ain’t slick.

And of course Holly Madison feels a personal affinity with Marilyn Monroe, unwilling patron saint of vapid starlets who want to appear complex. Here’s one of the book’s more rage-inducing paragraphs:

“Like me, Marilyn had suffered at the hands of some not very nice men. She was used, underappreciated, and struggled to find herself. She worked her way up in Hollywood with stars in her eyes and a kind heart, but found that Hollywood wasn’t always as kind in return. She may have been publicly adored, idolized, and lusted after, but she often felt alone and trapped. Those dark demons eventually got the best of Marilyn. Part of me knows that could have easily been my fate had I not chosen to take care of myself. I only wish poor Marilyn could have done the same.”

Wow. Wooooooow. I love this paragraph, because it reveals so much more about Madison’s character than she realizes. She puts herself in the same category as Marilyn Monroe, one of the most famous and most talented women of her generation, and did everyone catch the way she subtlely blames Monroe for her own suicide? Gee, if only Monroe had “chosen” to take care of herself, she might still be alive! If only Holly Madison had been around to show her the way!

Underneath the drama and the fluff and the gossip, Madison is (perhaps unintentionally) exposing something much darker and far-reaching than a bunch of backstabbing mean girls. The real fascination of this memoir is watching Madison explore how she was brainwashed and virtually imprisoned, and how she went about the process of slowly undoing the damage she incurred at the Playboy mansion – a process that is still ongoing.

Simply put, Holly Madison is a survivor of domestic abuse, although she doesn’t yet have the emotional vocabulary to articulate this. You only have to read a few paragraphs about Hugh Hefner’s intense control issues (he apparently hates red lipstick on women, and once screamed at Madison when she dared to wear it) and the way he pits the women against each other to realize that you’re reading a description of a textbook abuser. When Madison is describing the steps she took to leave the mansion (saving money, making an escape plan), she sounds exactly like everyone who ever had to go through the process of escaping an abusive partner.

It’s going to be easy for reviewers to demonize Holly Madison for her choices (and as you can see from the many, many paragraphs above, it’s hard not to) because, as I said in my review of Pamela Des Barres’s memoir of her time as a groupie, Madison is merely a symptom of a bigger disease. The real villain of this story is not backstabbing opportunistic women, but the man who orchestrated their struggles, and encouraged fighting among them so they would forget who the real enemy was. But Madison didn’t forget, and she’s at her best when her writing is full of righteous fury and frustration at Hugh Hefner, the man who kept her a virtual prisoner and destroyed her self-esteem so thoroughly that she contemplated suicide. Sure, Holly Madison is awful human being, but Hefner is the Dr. Frankenstein, while Madison is merely the monster that all the villagers go after with pitchforks.

In conclusion: fuck you, Hugh Hefner. You’re a bad person, I’m glad your entire empire is crumbling, and I hope whatever barely-legal girl you marry next smothers you in your sleep.

Verdict: five out of five stars, fight me

3 responses to “Down the Rabbit Hole: Curious Adventures and Cautionary Tales of a Former Playboy Bunny by Holly Madison”