God’s Crucible: Islam and the Making of Europe, 570-1215 by David Levering Lewis 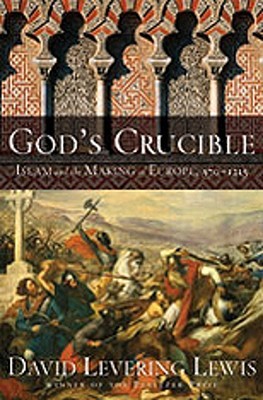 It took me a very long time to finish this book. I would stick with it for a few weeks, and then take a break from the book to read a novel or something. All together, I think I read five or six other books while trying to get through God’s Crucible. The problem wasn’t that the material was boring – I’ve been wanting to read a good, detailed history of pre-Crusades Islam for a long time, so I was really excited to find this – but it’s dense. Important historical figures appear and disappear from the narrative with very little notice, and Lewis expects you to keep up with the scores of characters and locations contained in this history. I don’t recommend trying to read this book on your morning train ride, is what I’m saying.

A quick note before getting into the meat of this review: prior to reading this book, I knew almost nothing about Islam or the history of the Muslim empire except what I was able to glean from biographies of white Christian conquerors like Isabella of Castille or Gertrude Bell. So I’m not in a position to evaluate how well Lewis presents this history; I can only give you my impressions of the book from the perspective of someone who was getting most of this information for the first time.

Lewis starts his book with a quick history of the origins of Islam, and this was fascinating to me – coming from a childhood of Catholic catechism classes, it was amazing that so much is known about Muhammad (I’m spelling the name as Lewis does in his book) as a historical figure, and I was excited and fascinated by all the information Lewis provides about the founder of Islam. His first wife was an older widow who owned her own business, and was one of Muhammad’s strongest supporters! The schism between Sunnis and Shiites first arose out from the question of who would succeed Muhammad after he died! One of Muhammad’s later wives was once involved in a scandal involving a necklace, and it reminded me so much of Marie Antoinette’s affaire du collier that I wondered if the former story really happened at all!

Once Muhammad dies, Lewis has to widen the scope of his book considerably, especially after the Muslim empire starts extending into what would eventually become Spain and France. This is where things start to get dense, but it still kept me interested. The most fascinating part of this section is when Lewis is discussing how the Muslim invasion prompted the Franks to make uneasy alliances with other scattered tribes, leading to the entire concept of a single, unified European identity. He focuses on one battle in particular, the battle of Poitiers, which for a long time was described by historians as The Battle that decided Europe’s future forever. Not exactly true, says Lewis, but he spends some time discussing what would have happened if the Muslims had been able to maintain their stronghold in Europe. What would it have meant for the future if the Frankish king, Charles Martel, hadn’t been able to beat back the Muslim invaders? Spoiler alert: we might have been better off.

“Had ‘Abd Al-Rahman’s men prevailed that October day, the post-Roman Occident would probably have been incorporated into a cosmopolitan, Muslim regnum unobstructed by borders, as they hypothesize – one devoid of a priestly caste, animated by the dogma of equality of the faithful, and respectful of all religious faiths. Curiously, such speculation has a French pedigree. Forty years ago, two historians, Jean-Henri Roy and Jean Devoisse enumerated the benefits of a Muslim triumph at Poitiers: astronomy; trigonometry; Arabic numerals; the corpus of Greek philosophy. ‘We [Europe] would have gained 267 years,’ according to their calculation. ‘We might have been spared the wars of religion.’ To press the logic of this disconcerting analysis, the victory of Charles the Hammer must be seen as greatly contributing to the creation of an economically retarded, balkanized, fratricidal Europe that, in defining itself in opposition to Islam, made virtues out of religious persecution, cultural particularism, and hereditary aristocracy.”

Lewis’s book is at it’s best when he’s discussing how much more advanced the Muslim world was in comparison to early Europe, and how a continuation of the Muslim empire (but to be fair, they were pretty powerful for a good long while) might have advanced Europe by decades, if not centuries. Sure, this is mostly opinion and speculation on the part of historians, but you can’t deny that the Muslim empire was lightyears ahead of Europe in almost every aspect, and then the Pope was like, “Yes, but they don’t like Jesus, so let’s go set everything on fire.” Ugh.

Although it took me a long time, and I don’t feel like I fully absorbed all of the information Lewis was presenting, I’m ultimately glad that I read this. Even though a lot of what was presented went over my head, I learned so much from this book. It gave me good background information on the history of Islam and the founding of Europe, as well as insight into the current political climate. Long, occasionally tedious and overwrought, but important, and an interesting exploration into what could have been.

“But al-Andalus, notwithstanding its fractious mixture of Arabs, Berbers, Goths, Hispanics, and Jews, and the splintering cordilleras, was an intact creation by the end of the tenth century. By contrast, the seams of Charlemagne’s Europe – once it was deprived of its animating, aging genius – began to loosen badly. The center failed to hold and the avaricious parts turned on one another while even more fierce Scandinavian and Slavic intruders tested their defenses and ravaged the countryside. If anything, the situation in 976 portended a long, antipodal continuity of the two Europes – one secure in its defensesm religiously tolerant, and maturing in cultural and scientific sophistication; the other an arena of unceasing warfare in which superstition passed for religion and the flame of knowledge sputtered weakly.”

2 responses to “God’s Crucible: Islam and the Making of Europe, 570-1215 by David Levering Lewis”