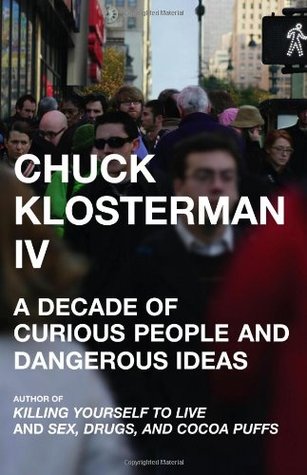 I first learned about Chuck Klosterman through my friend, who is a nonfiction writer and swears by his essay collections. Klosterman is primarily a music writer (imagine Lester Bangs if he had grown up in the golden age of hair metal) and most of the writings featured here are from Spin and Esquire. The collection is framed as a retrospective, with Klosterman introducing pieces by commenting on how his views have changed by then, or why he now hates the article he’s about to share (he even includes articles on the Fargo rock scene that he wrote when he was twenty-three, and he’s appropriately embarrassed about it). The include celebrity profiles, “Best Of” lists, what-if scenarios, and musings on VH1 Classics and the Olympics. At their best, his essays blend pop culture and philosophy seamlessly – the book is worth it just for the article detailing the time Klosterman met Britney Spears and tried to unravel the mystery of who she actually is vs. who she pretends to be (“After I spent my time with Spears, people kept asking me, ‘What is she really like?’ My answer was usually, ‘I don’t know, and I don’t think she does, either.'”).