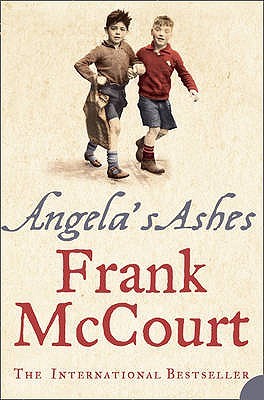 This book is kind of like that bit in A Chorus Line where the director is making everyone tell him about their childhoods and the one guy goes, “Nobody wants to admit they had a happy childhood.” There are two instances where this statement is extremely true: show business, and memoir writing.

Angela’s Ashes (which is apparently the first in a series?) chronicles the childhood and adolescence of Frank McCourt, born into a poor Irish family with no money but a surplus of babies. His mother, Angela, does the best she can to prevent her children from starving to death on a daily basis; meanwhile the patriarch of the family is a man who, as Jack Donaghy might say, “belongs in the Smiling Irish Bastard hall of fame.” Things aren’t good, is what I’m saying. The kids dress in filthy rags, they have to collect coal on the side of the road to heat their depressing shack of a house, the majority of the kids die of some horrible disease, the father insists on drinking every goddamn penny he earns, and Frank just wants to drop out of school so he can get a job and maybe afford a meal every few weeks. Bleak does not begin to cover it.

(giant sidebar: did anyone else watch Enlisted? Of course no one did, that’s why it got cancelled after one season even thought it was fantastic. Anyway, there’s a bit where one of the characters is super depressed so he decides to read Angela’s Ashes, to further wallow in misery, and he tells another character, “I’m at the part where he gives a raisin to the boy with no shoes.” I watched that part and thought, well obviously the writers made that up, that’s just a spot-on parody of the stuff that goes on in miserable memoirs like that. But then I read the book a few weeks later and guys, that scene totally happens. That’s the level Frank McCourt is operating at.)

Look, I’m not saying Frank McCourt had to put a happy face on his horrible, horrible childhood just to make me less uncomfortable. His memoir is searing and honest, but it is also unrelenting in its bleakness. There are small flashes of happiness here and there, but the book was so overwhelming sad that every time something good happened to the family in this story, my first thought was, “Well, this can’t last.” Which, actually, is a very Irish-Catholic reaction to have, so congratulations to me for making my ancestors proud.

Realistically, I should give this four stars, because I liked the book, but I’m docking a point because of the ending. Without giving anything away, it’s just too abrupt. Nothing gets resolved, there’s no sense of a conclusion, it’s just like McCourt got tired of the book and said, “Well, let’s just stop here” and then it ends. It was not satisfying, and not worth all the misery I went through to get to the end.