Lioness Rampant (Song of the Lioness #4) by Tamora Pierce 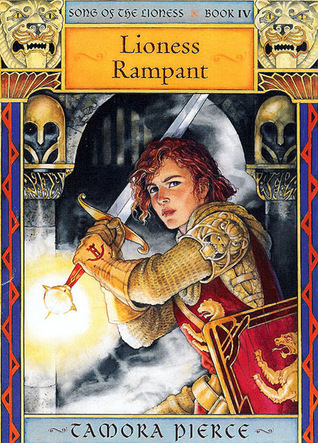 Having reached the end of the Alanna books, I’m really sad to be done with the series. Not just because Alanna is a fantastic heroine – seriously, I’m currently drafting legislation to make these books required reading for sixth grade girls everywhere – but also because this is one of those rare occasions where I feel like a book could have been longer, and should have been longer. The entire Alanna series has felt very rushed, since Book One when we sped through two years of knight training in about two hundred pages, and I wish that these books had been published at a time when children’s series were allowed to contain 700-page epics.

At the very least, it feels like there should be one more book in the Alanna series. As always, Pierce is racing through her plot points as quickly as possible, but in this book it’s especially obvious that there are two major plotlines that each deserved their own book: first, Alanna goes on a quest to retrieve the Dominion Jewel, a super-powerful magical item that will make Jonathan a super-powerful king and unite the kingdom somehow; and while she’s doing this she also meets a fugitive princess and her scrappy teen bodyguard, and we’re introduced to more of this universe’s complex socio-political climate. Then, once Alanna gets the jewel, she goes back to the capital city and lives at court for a while, where we have two intersecting plotlines of George Cooper trying to hold onto his role as King of the Thieves and Prince Jonathan trying to uncover whatever plot the only-mostly-dead Duke Roger is cooking up.

That’s a lot of plot to cram into 300 pages, and both storylines have to fight for space, and both suffer for it. I really, really wish this last book had been split into two books: the first one could be all about the quest for the Dominion Jewel and the people Alanna meets on said quest, and the next and final book would be about her time at court, the struggle with Duke Roger, and the conclusion to the Dominion Jewel plotline. I wish this had happened, not just because it would have meant that these stories would have been better developed and fleshed out, but also because, at the end of Alanna’s series, I still have a lot of questions. The biggest one is the question of what, exactly, the Goddess has had in mind for Alanna this whole time. She gave Alanna the magic sword, the magic jewel, the magic cat…for what? So Alanna could fight Duke Roger? It feels almost like there was supposed to be something bigger, something more epic, at the end of this book, and it was scrapped to make room for a classic Boss Fight between Alanna and Roger. There just wasn’t enough time: to learn what Alanna’s exact connection to the Goddess was, for minor villains like Alex and Delia to be properly developed as human beings, to find out just what Faithful’s deal was…like I said above, I rarely find myself wishing that a 300-page book was twice as long, but that’s how I felt about Lioness Rampant.

Frustrating length aside, this was a great conclusion to Alanna’s story. We got to see her discovering more of who she is and what she wants (often this self-discovery occurs thanks to her affair with a Shang warrior named Liam Ironarm, which, damn. Four for you, Alanna of Trebond, you go Alanna of Trebond!), while also questioning whether the life of a knight is one that she actually wants. Again, I would have loved it if this particular internal struggle had been explored in more depth, but I understand that the young adult market at the time didn’t really make it possible for Tamora Pierce to write five-hundred page volumes for her series.

It’s too bad that I didn’t get to spend as much time with Alanna as I wanted to, but I enjoyed every single adventure and every page. The writing never really elevated itself to the level I wanted, but ultimately it didn’t even matter because Alanna is such a great heroine, her adventures were fantastic, and these books are so important for little girls. Books about girls with swords will always be my personal crack, but this series is the gold standard.