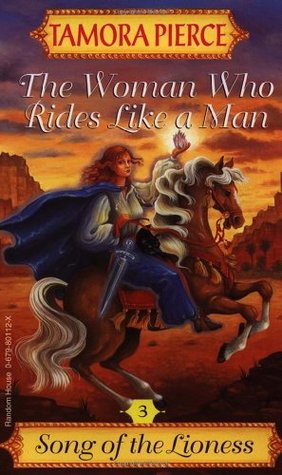 Based on what I’ve read on Goodreads, the general fan consensus seems to be that this book is the weakest of the quartet. I enjoyed it just as much as the previous two books, but can see why people tend to list it as their least favorite. The story takes place almost entirely in a single location, as Alanna goes to live in the desert after graduating as a knight (and killing Duke Roger) at the end of Book 2. The people she falls in with are the Bazhir, who we met briefly in Book One when she and Jonathon went to the Black City, but the people and their culture is explored in much greater depth here.

I’m not objecting to the single setting here – honestly, it was kind of nice to have the narrative slow down a little, instead of racing from one place to another and covering two years in two hundred pages – but it gave this book a very different feel than the previous two. Compared to the previous books, the pace of this one feels practically glacial, with the timeline of the whole story covering just a few months. After seeing how quickly Pierce moved through plot points in the previous books (hey, anybody remember that time we went to war with Tusaine?) I found myself wondering just how long Alanna was planning to hang out with the Bazhir.

The majority of the book, it turns out. But to be fair, she has a lot to do. In the beginning of the story, Alanna falls in with a Bazhir tribe and they eventually accept her as one of them and then she becomes their shaman, because this is a Tamora Pierce book and Alanna of Trebond is a fucking boss at everything she does. She spends most of her time training three Bazhir kids in magic, and two of them are girls, and all of the tribespeople are like, “But a GIRL can’t do magic or be a shaman!” and Alanna is like “Prepare to have your minds blown, Noble Savages!” As you can guess, the Bazhir stuff wanders into uncomfortable territory more than once. At best, they’re fulfilling the Noble Savage trope and giving Alanna guidance like this is some Eat Pray Love white woman on a vision quest bullshit, and at worst they’re just flat-out Orientalist stereotypes. There’s a whole ceremony to make her an honorary Bazhir, and even though the scene itself is perfectly fine, all I could think about was that super racist number from Annie Get Your Gun. The whole storyline is very much a White Savior cliche, right down to Alanna smashing her way into a culture she has almost no understanding of and insisting they change their ways immediately. The only thing that redeems this storyline is the two girls she trains as shamans – they ultimately change most of the Bazhir’s views on women, so at least the people making strides to change the culture are actually from that culture.

So that wasn’t great. But everything else that happens here is awesome. Jonathan shows up halfway through the book and proposes to Alanna (Jonathan, honey, how many way will this not work?), and then proceeds to go full Joffrey, turning into an entitled little shit who seems to have forgotten the last eight years when Alanna was his best friend and fellow squire. They have an explosive fight where Jonathan yells at Alanna that she needs to start acting more feminine and she basically tells him to go fuck himself, and then she flounces off to go have sex with George Cooper for a while, because fuck you, Jonathan. It’s glorious.

My biggest wish for the previous book was for Alanna to make a female friend, and Tamora Pierce has answered my prayers. After two books of believing that she was the exception to the rule that girls are silly and weak, Alanna meets a goddamn plethora of women who defy that stereotype. In addition to the two Bazhir girls she trains in magic, Alanna also meets George’s cousin Rispah, a female thief who was so awesome in her few scenes that I immediately started imagining her and Alanna going on a Thelma and Louise-style roadtrip together. She almost makes up for Delia, who you’ll remember from the last book as that dumb slut who flirted with Alanna’s friends and turned out to be working for Duke Roger, because girls who flirt with your boyfriends are always full of dark magic. Delia is still here, and I’m kind of hoping that she’s going to be the main villain in the next book, just so she has something fun to do.

It’s not the best book in the series, but overall The Woman Who Rides Like a Man is another great Alanna adventure, full of excitement and magic and swordfights and sex with cute boys and fantastic conversations like this, which all little girls need to study and remember:

“‘You are a terrifying creature,’ the Voice told [Alanna] solemnly. ‘You do not take your place in your father’s tent, letting men make your decisions. You ride as a man, you fight as a man, and you think as a man-‘
‘I think as a human being,’ she retorted hotly. ‘Men don’t think any differently from women – they just make more noise about being able to.’
As Coram chuckled, Mukhtab said, ‘Have you not discovered that when people, men and women, find a woman who acts intelligently, they say she acts like a man?'”