All About All About Eve: The Complete Behind-the-Scenes Story of the Bitchiest Film Ever Made by Sam Staggs 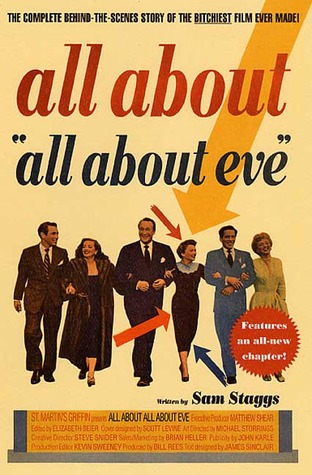 On the Internet Movie Database website (or IMDb.com) there’s a trivia feature for every movie and show included on the site, where contributors post little facts about the work in question – I find this feature addictive, to the point where I have to consult the IMDb trivia page every time I finish a movie or TV show. It’s how I know that Sofia Copplola intentionally included a shot of modern Converse shoes in the shopping montage of Marie Antionette, the argument between Jack and Rose on the deck of Titanic right before the spitting scene was entirely improvised, and Clark Gable may have gotten the original director of Gone With the Wind fired because the director knew about Gable’s past as a gay escort. Random behind-the-scenes trivia is my crack, and I love learning about all the hidden dramas and secrets that went into the making of a classic film. And ladies and gentlemen, All About Eve is a minefield of secret scandal. I knew things were going to be good when Staggs describes attempting to contact Celeste Holm in one of the early chapters (nearly everyone who had worked on the film was dead by then) and she essentially responds, “Why the FUCK are you calling me?!” As Bette Davis so memorably said: fasten your seatbelts; it’s going to be a bumpy night.

The first half of the book, where Staggs gives an in-depth, almost blow-by-blow description of the filming process of the movie, is everything you want it to be and more. It’s surprisingly light on inter-cast conflict (Bette Davis, notoriously antagonistic to female costars, got along with everyone except Celeste Holm, who hated her – although Davis may have made Marilyn Monroe cry after their scene together), but filled to the brim with delicious gossip that adds to your appreciation of the movie. For instance: the first scenes filmed were the ones that take place in the physical theater, when Eve becomes Margot’s understudy. Bette Davis showed up the first day with a raspy voice, the result of her bursting a blood vessel in her throat after having a screaming fight with her ex-husband. She was terrified about the director’s reaction to her losing her voice, but Mankiewicz loved it, and told Davis to keep the voice. She maintains the low, Tallulah-like voice throughout the movie, but it’s most obviously strained in those scenes in the theater.

Besides being a delightful behind-the-scenes look at the making of an iconic film, the book also serves as a primer to the business of moviemaking in the early 1950s. The politics of casting get explored in detail, as well as the frankly absurd censor standards: “For each film reviewed by employees of the Production Code, a detailed summation page was drawn up that functioned as a de facto moral index of the film’s content. In the case of All About Eve, this summation page tallies ‘much drinking.’ It also lists ‘happy ending, in the sense that each achieved his or her goal,’ and in response to the question, ‘Does picture end with promise of marriage or continued love?’ the censors wrote ‘Yes.'” Even the post-production stuff is interesting – I finally know exactly what an art director does, thanks to this book.

Where the book begins to skid, however, is after Staggs has exhausted his supply of information about Bette Davis and Co and starts getting into the influences the movie had on pop culture. Too much time is spent discussing, in boring and inconsequential detail, the creation and run of a musical based on the movie, called Applause (which apparently won the Tony for Best Musical in 1970, so good for it, I guess). Staggs also spends a strangely large chunk of the book explaining the camp appeal of All About Eve and how it resonated with gay men, and frankly, considering we’re discussing a movie where women take center stage and there was some lesbian subtext to the relationship between Eve and Margot (subtext that Staggs himself discusses) it seems pretty weird that we’re talking about how gay men were affected by the movie, without mentioning gay women. Staggs also includes a transcript of himself (I assume it’s him – there’s a guy named Sam who asks all the leading questions, anyway) and several friends discussing the movie, and not one of the participants is female. Staggs doesn’t spend nearly enough time analyzing what this movie did for portrayals of women in film, especially since he quotes Mankiewicz saying, “Male behavior is so elementary…that All About Adam could be done as a short.”

Bottom line: the first half is a scandalous, fun romp through one of the best movies ever made – like listening to your movie buff best friend monologue excitedly about his favorite movie over brunch. The second half – a dull slog that overstresses certain elements while completely ignoring others.

One response to “All About All About Eve: The Complete Behind-the-Scenes Story of the Bitchiest Film Ever Made by Sam Staggs”