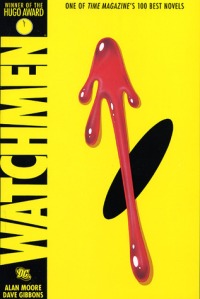 Two realizations occurred to me while reading this book:

1. The movie version, while long as hell, is actually really well done and accurate. And by “accurate” I of course mean “basically a frame-by-frame reproduction of the graphic novel.” Not necessarily a bad thing, although they do change some details of the ending a little. I was okay with both versions, though. I think I still prefer the graphic novel, mostly because when I read it I don’t have to deal with the horribly miscast Malin Ackerman. I knew she was ruining Silk Spectre II before I even read the original story. Every other character is perfectly cast, though, so it’s mostly okay.

2. The movie The Incredibles is Watchmen for kids. For example, in excerpts from his book that are spaced throughout the graphic novel, a former superhero discusses his costume-making process: “I experimented with a cloak, remembering how the Shadow would use his cloak to misguide enemy bullets…In practice, however, I found it too unwieldy. I was always tripping over it or getting it caught in things, and so I abandoned it for an outfit that was as streamlined as I could make it.”
Or, as Edna Mode would say, “NO CAPES!”

Movie references aside, I really liked all the technical details about being a superhero I’d never considered before (for example, how do they keep those little masks stuck to their faces? Spirit gum.), as well as the psychology of the superhero. That’s really the whole point of Watchmen: the kind of people who are willing to put on a costume and fight crime may not be the kind of people you actually want to have running around beating up criminals. Case in point: Rorschach. I…I don’t even have words to describe this character. The movie didn’t even really do him justice.

In conclusion, ugly and wonderful and everyone should read it, even if (especially if) you’ve never picked up a graphic novel before.

“Yes, we were crazy, we were kinky, we were Nazis, all those things that people say. We were also doing something because we believed in it. We were attempting, through our personal efforts, to make our country a safer and better place to live in. Individually, working on our separate patches of turf, we did too much good in our respective communities to be written off as mere aberration, whether social or sexual or psychological.
It was only when we got together that our problems really started….Dressing up in costume takes a very extreme personality, and the chances of eight such personalities getting along together were about seventy-eleven million to one against.”